Corcovado is a unique biological reserve located in Costa Rica, famous for its biodiversity as it shelters several endangered animals that are possibly facing extinction. In this article we want to share with you 5 Corcovado National Park endangered animals.

Top 5 Corcovado National Park endangered animals that you should meet

If you visit this national park you may have the chance to see at least 5 of these unique endangered animals, some of those are Tapirs, Jaguars, American Crocodiles, Giant Anteaters and Harpy Eagles.Tapirs, one of the endangered animals.

1)  Tapirs, inhabitants of the tropical forest

Tapirs like to hang around waters, frequently swimming to the bottom to cool off, feeding on underwater vegetation and hiding from predators. The numbers of these endangered animals were reduced due to habitat loss and hunting for meat and hide. They have powerful jaws to defend themselves from several predators, but they are generally shy. There is more information available about the tapirs here.

The jaguar is a stalk-and-ambush predator who is at the top of the food chain. It is the 3rd largest cat in the world. They’re distinguished from other cats by the spots on their skin that look like roses.

The Jaguar at Corcovado National Park have powerful jaws that can break skulls. They are excellent climbers and are usually waiting on top of trees scouting the habitat for prey to pounce down on. More information about this beautiful endangered animals here.

3) American Crocodile, one of the Corcovado National Park Endangered animals.

This crocodile is a silent predator, and have the strongest bite of any animal which is a very dangerous combination.

These endangered animals are usually moving slowly or staying still for camouflage, but they are surprisingly extremely fast while attacking pray and their bodies allow them to move from land to water and vice versa with extreme mobility.

The first thing you notice about this animal is its very long nose. They use this nose to eat more than 35,000 ants and termites per day! These creatures are smart because they do not completely destroy the nests they attack so that they can come back later for more. Just because they eat ants, doesn’t mean they’re not dangerous. These have massive claws that scare even Jaguars away.

The Harpy Eagle is the most powerful and largest predatory birds in the Americas.

It has a hooked beak and massive talons that are dangerous in a fight. Its talons are as big as the claws of a full-grown bear. It uses them to repeatedly stabbing its prey. Its legs are also very powerful and can get as thick as the wrist of an adult human. 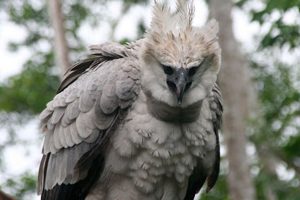 The number of species found in Corcovado National Park is impressive. Not all of them are in danger of extinction but they are very well protected within the park.

The number of species that has been identified so far:

There are no records of animal attacks on humans. However, it is important to remember that Corcovado is a Protected National Park. The ecosystems remain intact and the animals are free within the perimeter of the park. For this reason it is important to stay in the areas designated for tourists and not to leave the trails.
For example, Corcovado has a sizable population of endangered peccaries, which travel in big family groups of up to 30 members. They rarely attack humans, but since they have limited vision is important to avoid their path.

How many species are in Corcovado National Park ?

Corcovado is home to 370 bird species 140 mammal species, and over 10,000 insect species. This Park is known as “the most biologically intense place on Earth.”

How much does it cost to go to Corcovado?

LThe entrance fee is around 15USD. However, getting there could be a bit tricky. We recommend you to take an organized tour from Uvita. Taking a Tour is better because it includes the cost of the raid, the entrance, the meals and certified guides.

Since these are endangered animals and some facing extinction, you can only find them in specific reserves.

The Corcovado National Park’s biodiversity allows you to see, if you are lucky enough, a combination of rare animals all at once.

If you would like to see some of these exotic animals, which is only a privilege to many people, you can join the tour to Corcovado National Park organized by Costa Rica Dive and Surf.

We will make sure you get the best out of this once in a life time experience.  Contact us today !