Arriving at the northern pinnacle the conditions were fantastic !

Floating at a delightful 28 degrees Celsius with a negligible current and dazzled by visibility topping 65 feet.

Carolina led the first group with 5 divers with Andi closing, and a little further back I led 4 divers …

As I direct my gaze towards the stone, I receive three signals from my partner …

And there it is, a huge bull shark emerging from the center of the stone to the west. A voluptuous and very elegant female makes a debut and slowly disappears into the deep blue.

Happiness floods us, but our divers do not magnify what we have just seen. A few minutes later on the other side she appears again. This time the contact lasts a few more seconds.

Several minutes have passed and the other group leaves. But I prefer to stay, sacrificing the possibility of reaching the seahorses in the shallowest part.

The bull shark rewards my stubbornness and passes us again, very slowly from the cleaning station … some blue surgeons swim in front of her, one of them very unlucky ….

I try to remember that moment frame by frame, but my eyes and brain weren’t able to capture the speed of the attack … and the surgeon was mortally wounded … hideous parallel scars crossed his entire body.

In the next few minutes she came back several times to finish her lunch. But our presence made her uncomfortable. In one of her close-ups we made eye contact, but I couldn’t understand the message….

A couple of ojaranes showed up, (braves, almacos, …), besieging the dying surgeon, but they do not dare to approach …

We, four divers, very organized, very close together and very attentive to the debut of this huge bull shark.

One of my divers points me to 800 pounds on his gauge. When I answered back, I saw this impressive shark surrounding us from behind… ..uffff

The little air that my diver had left, and being in the middle of the circle is a good reason to go back. 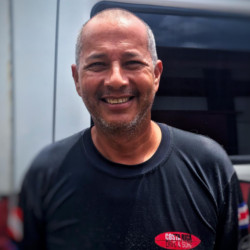 Diving Instructor with more than 30 years of experience and 7300+ dives made.
PADI OWSI / CMAS, He has dived multiple sites such as Gorgona or Mapelo, Choco, Isla del Coco, Isla del Caño, Catalinas, Tayrona, Rosario Islands, San Andrés Archipelago and many others.

The bull shark is classified as one of the top 3 most dangerous sharks, along with the tiger shark and the white shark.

His bite is capable of generating more than 600Kg of pressure. However, although it is always important to take precautions, we must remember that none of these 3 specimens of sharks is on the list of the 10 most dangerous for humans.

In fact, the most dangerous animal is the hippopotamus and not the shark.

Where can you see the Bull Shark in Costa Rica?

In Costa Rica, the Bull Shark can be found mainly in the Murcielago Islands, located in the north of the country.

It is also possible to see them on Isla del Caño, although less frequently.

What does the bull shark eat?

The bull shark is a carnivorous animal that eats a wide variety of fish. Their diet includes small sharks, crustacean rays, remoras, fish.

It is important to remember that, like other species, bull sharks do not eat humans. Attacks on people happen when the shark is confused or feels threatened.

Can I dive with Bull Sharks in Costa Rica?

Yes. Some bull shark watching tours are usually organized on the Murcielago Islands. On Caño Island, specifically Bajo del Diablo, it is possible to see them occasionally, although less frequently.

Remember that it is necessary to have at least an advanced open water certification to dive these sites.

In other countries there are tours dedicated to diving with sharks, such as aquaworld, which offers sighting tours on that beach.

What to do if I come across a Bull Shark while diving?

Just keep calm and enjoy observing one of the most beautiful animals in nature.

Encountering a Bull Shark can be fascinating. But remember that there are many more species of sharks to know and observe.

Some points of the Isla del Caño are excellent to see some species of sharks. Although the bull shark is not the most frequent, it is possible to see whale sharks, white-fin sharks, large mantas and many other species.

If you want to experience a great adventure, perhaps like the one in this story, send us a message.

At Costa Rica Dive and Surf we guarantee quality diving and an unforgettable experience.

Ocean Tales seeks to share stories that inspire and teach. If you have a story that you want to share with us and would like us to publish it here, please contact us. We would love to hear it.